Posted on September 28, 2016 by Phillip Roberts

Cotton growers in Georgia are understandably concerned about the impact of bacterial blight on their cotton yields.  Beginning in 2015 and continuing into 2016, bacterial blight has been more visible in Georgia’s cotton then it has been in a number of years.  Reasons for this are unclear.  Some of the newer varieties could be more susceptible.  There could have been a new introduction of the bacterial pathogen into our cotton fields.  We could be dealing with a new and more virulent strain of the pathogen.  Whatever the reason, appreciation is expressed to the consultants, Extension agents and growers who have worked very hard over the past two seasons to document the impact and spread of this disease.

Bacterial blight is not a new disease to cotton in Georgia and was likely in some of our fields even before this current outbreak.  Although not commonly reported since I started in 2000; I have seen examples of the disease, to include leaf spots and infected bolls, over the years.  When bacterial blight is not severe, symptoms may be difficult to detect as time and energy are focused on more important concerns.  Certainly two things have changed as of the 2015 season.  First, in 2015 growers planted a highly susceptible variety, DPL 1454 B2RR which clearly sustained losses to bacterial blight.  It is known that other varieties are susceptible to this disease as well.  Second, we (in a general sense with consultants often in the lead) are scouting and looking much harder for bacterial blight than we have in the past.  This does not mean in any way that agents, consultants and scouts were not diligent in previous seasons.  Quite the contrary, for it was they who brought this disease to the forefront for growers.  But I believe that in a significant effort to document where the disease is today, we may be finding symptoms at very low levels that could have been there in the past as well.  This is not meant to diminish the importance of the disease, but rather an attempt to keep the current impact of the disease in proper perspective.  Without question, bacterial blight is a more important problem for cotton growers in Georgia than it has been in a number of years.

The causal agent of bacterial blight is Xanthomonas citrii pv malvacearum (XCM), a pathogen whose name has changed several times over the past 125 years.  The addition of “pv malvacearum” is nomenclature that this form of the bacterial pathogen is very specific in the species of plants it will affect, likely only cotton.  Additionally, for a number of years, it is believed that the predominant form of XCM present in our cotton fields is “Race 18”.  The term “race” means a form of the pathogen that will infect susceptible varieties of cotton but not those with resistance to “Race 18”.  This is important to know because if a shift in races occurs, e.g., a new race other than Race 18 is dominant, then we could see a change in the aggressiveness of the bacterial pathogen and also could see a collapse of previously “resistant” varieties.  Today there is not an easy way to tell the race type affecting cotton in Georgia; however disease samples are being sent so that as new techniques are developed, we can have a better idea of race structure of XCM in the state and nation.

The pathogen causing bacterial blight of cotton infects the crop passively; that is the bacteria exploit natural openings, such as stomates, hydathodes and lenticels, and wounds to the plant, such as those formed by blowing sand in windstorms.  There is also limited information to suggest that the pathogen can be transmitted by some boll-feeding insects; however this is much less important than other modes of spread.

It is well known that XCM can be spread through infested seed; however the process of acid delinting seed has greatly reduced, but not eliminated transmission of the disease by seed.  The bacterial pathogen can survive between cropping seasons in infected debris, but is unable to survive long periods in soil without debris or when the debris is buried and deteriorates.  The disease can be spread to some degree by movement of equipment through a field and can be spread within a field by wind and blowing rain.  Irrigation and rainfall create conditions favorable for further development and spread of the disease in a field.

There are five basic symptoms associated with bacterial blight of cotton.  The first is “bacterial leaf spot” which is characterized by fairly small, angular spots on the leaf with a water-soaked or “greasy” appearance.  The angular, geometric shape arises as the spot is delimited and defined by the veins on the leaf.  The second symptom is “vein necrosis” where the pathogen enters the veins of the leaf and created a very diagnostic dark “lightning bolt” appearance.  The third symptom that develops is “leaf necrosis” where with time, the infected leaf begins to shred and tatter.  The fourth symptom is “black arm” where the pathogen invades the vascular tissue of the leaf petioles and stems, resulting in a darkening and possible rot.  The final, and perhaps most important symptom, is the “bacterial boll rot” initially characterized by small, water-soaked spots on the bolls that later can be colonized again by aggressive fungal pathogens.

Yield losses to bacterial blight in a field are variable.  If the disease remains confined to the leaves and is not severe in the field, then losses will likely be negligible.  If significant premature defoliation occurs, then yield losses approaching 10% could be expected.  If significant boll rot occurs, then losses approaching 25% or more could occur.  Note, simply identifying bacterial blight in a field does not mean that yield losses are associated with it.

Management of bacterial blight of cotton can be frustrating to growers because there is nothing that can be sprayed to control the disease should it occur in a field.  The three fundamental tactics to control bacterial blight are to 1) use non-infested seed, 2) plant a resistant variety, and 3) manage infested crop residue through crop rotation or burying/destruction of crop residue.  In recent years, cotton growers in Georgia have not needed to concern themselves with varieties resistant to bacterial blight because it was not a problem.  Now, and in the future, resistance to bacterial blight will be a consideration in response to our current epidemic, but this resistance will not be the ONLY consideration.  For example, varieties with resistance may not have the same yield potential as susceptible varieties and may not have the same resistance to other pests, such as root-knot nematodes, that other varieties have.

For the foreseeable future, cotton growers in Georgia need to be prepared to fight bacterial blight as only time will tell how much of a problem the disease will be.  However, if the events in Texas and Mississippi (two states at the forefront of the bacterial blight issue) are any indication for our future, then we can be assured that the sky is not falling.  Based upon disease loss estimate reports from those states from 2010 to 2014, yield loss associated with bacterial blight was only a fraction of losses to either nematodes or seedling diseases.  We can manage this disease and grow profitable cotton in Georgia. Our team includes Extension and researchers from UGA and other institutions, consultants, the Georgia Cotton Commission, Cotton, Inc., our seed companies, and, most importantly, our cotton producers. 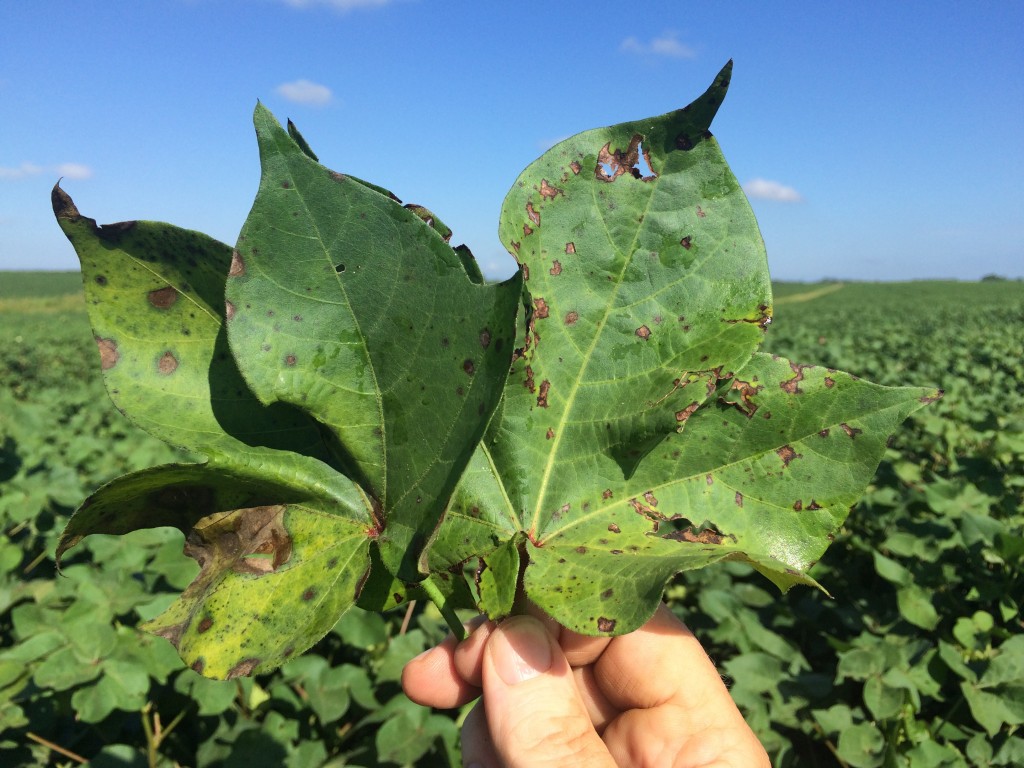 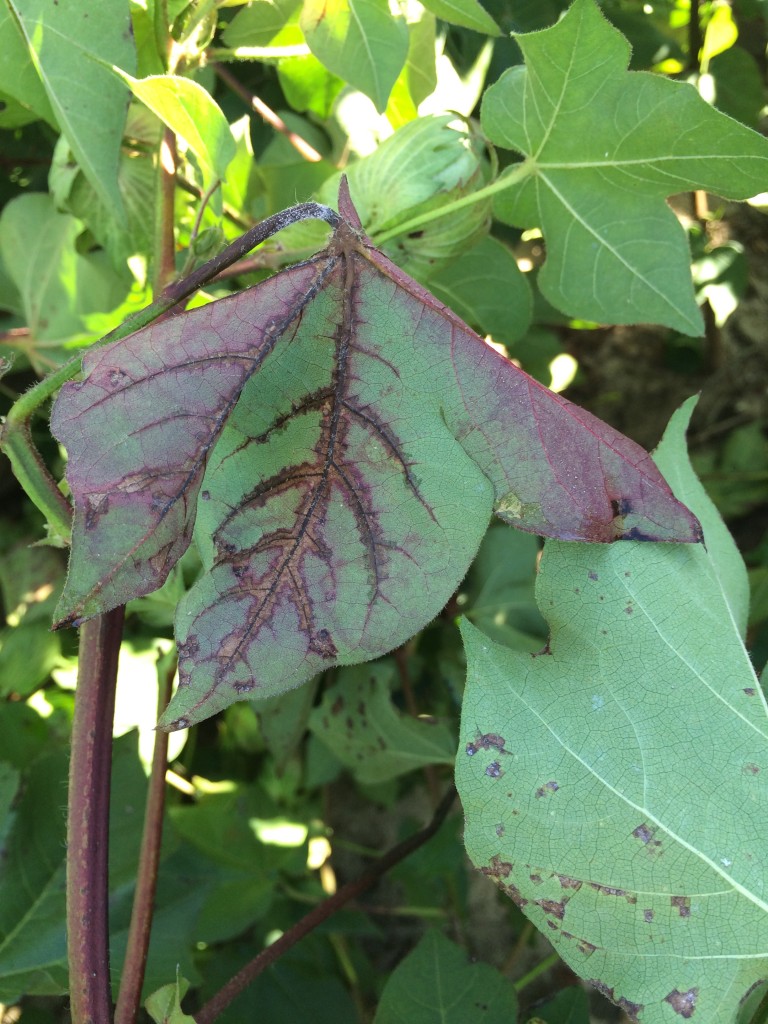 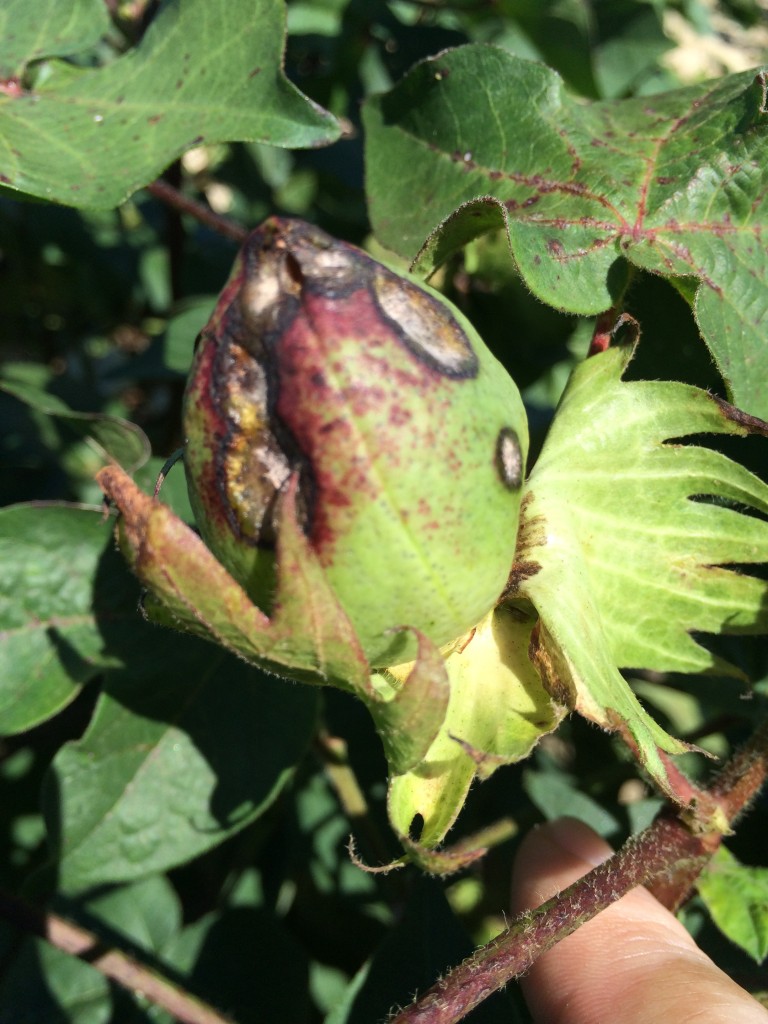 This entry was posted in Cotton Production, Disease Management. Bookmark the permalink.