In commodity pricing, a chart is like a road map—it can show you where you’ve been and help you navigate where you’re going.  The 2 charts here are Dec13 (new crop) prices—the top one showing the past 6 months and the bottom one showing the past year.  Keep these in mind as we discuss the latest numbers, implications, and outlook. 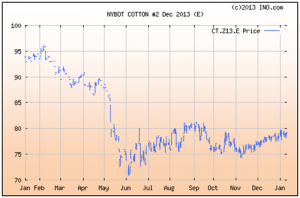 USDA’s January supply/demand report was released today.  The numbers do not yet appear to support a case that cotton prices will trend higher.  Of course, some event can occur and this can all change tomorrow, next week, or next month!  But the numbers point to a cautious outlook.

It is no secret that China is a big key to the outlook for 2013 crop prices.  It is forecast that China’s stocks/reserves on hand going into the 2013 crop year on August 1, will be 5 million bales more cotton than they use in an entire year.  So, it’s a big deal what their policy will be for using these stocks vs. importing new crop cotton.  It was reported recently that Chinese mills might be allowed to import cotton if they also agreed to buy from the reserves.

It appears that in an attempt to increase its once very low reserves, China may have gone overboard and purchased too much cotton.  China continues to be a buyer and while this continues to support prices in the near term, this large buildup of stocks must eventually begin moving into the pipeline and the uncertainty of when and how that will happen hangs over the market like a dark cloud.

Dec13 cotton futures are down slightly today.  New crop corn is now below $6 and soybeans below $13.  In the meantime, cotton has trended up but seems to have hit a ceiling at 79 to 80 cents.  The implication is that some of the competitive disadvantage that cotton is expected to have with regard to 2013 acreage decisions may have lessened.  US cotton acreage will be down in 2013—there’s no doubting that.  But, the magnitude of the decline may not quite be what we once thought.  We’ll just have to wait and see.  I think a 15% to 18% decline is likely.

At this juncture, based on the evidence before us to-date, prices for the 2013 crop could reasonably range between 70 and 85 cents.  You don’t want to sell most of your crop at the low end if prices head that way.  Take some protection.  But leave some room to take advantage if prices do go to the upper end.