By Don Shurley and Yangxuan Liu

USDA announced last July that it would act to assist farmers damaged by tariffs and reduced exports.  In September, the Market Facilitation Program (MFP) was initiated and the signup began.  MFP payments are received on actual 2018 production.  The payment rates for crops commonly grown in Georgia are listed below: A first/initial payment was authorized on half of 2018 production.  If the farm was signed up for MFP and 2018 production has already been certified, the first payment has likely already been received.  A second payment—at the same MFP rate on the other half of production, was announced on December 17, 2018.  If the farm is already signed up and certified the production, the second payment has also been made or should be made shortly.

Producers did not need to sign up again for the second payment.  If the first payment has not been or was not received, one payment for the total amount will be received.  Below is an example for how the payment is calculated. Assuming a farm produced 750,000 lbs or approximately 1,500 running (gin count) bales of upland cotton lint in 2018.

Example Total (All In One Payment):

Unfortunately, MFP payments for cotton will be less than expected.  This is due to crop loss caused by Hurricane Michael and excessive rains and delayed harvest during the entire harvest season that followed.  Prior to Hurricane Michael, USDA projected the Georgia crop at 2.9 million bales or approximately 1.4 billion pounds.  The MFP on that amount would have been approximately $83.5 million.  The latest USDA projection for the Georgia crop is approximately 936 million pounds and MFP of $56.1 million—a 33% reduction.

The limit on MFP payments is $125,000 per person or legal entity for corn, cotton, grain sorghum, soybeans, and wheat combined and applicants must have an AGI of less than $900,000.  The limit on MFP is separate from the limit on ARC/PLC.

Given the relative crop acreages in Georgia and the relatively small payment on corn, on average, the majority of a person or entity’s MFP will be on cotton if the operation grows cotton.  For example, to reach the $125,000 payment limit from cotton only, it would require about 2 million pounds (4,340 USDA 480-lb statistical bales or about 4,183 “running bales” from the gin).  At the state average yield of 693 pounds per acre, this would be equivalent to roughly 3,000 acres of cotton per person or legal entity at that yield.  Had yield been higher as expected (and many producers have said they had a record crop prior to Michael), the limit would have reached the cap at much smaller production and would have been an issue for some producers.

At the time of this is written, there is yet no 2018 disaster relief package but the outlook appears to be improving for having legislation soon.

After months of budget negotiations, disagreements, delays, continuing resolutions, and a partial government shutdown, both the House and Senate passed the final budget package for FY19 on February 14, 2019 and President Trump signed the legislation into law on February 15, 2019.

Unfortunately, although included in earlier budget bills that never fully passed through both House and Senate, 2018 disaster funding was omitted from the February 14 final FY19 legislation.  This means that disaster funds will now come in the form of a separate (supplemental) appropriations bill.

Recently, a bi-partisan group of Senators spearheaded by Senator David Perdue (GA) introduced legislation to the Senate for $13.6 billion in relief efforts including $3 billion for crop-related losses during 2018 due to Hurricanes Michael and Florence and other natural disasters.

Details and the specific workings of the program are unknown and yet to be determined by USDA, should the legislation proceed forward and become law.  From what is known, this Senate legislation seems to closely align with a similar House bill that passed back in January.  Therefore, if the Senate bill passes, it should not be difficult and time-consuming to work out the differences in a conference bill.  President Trump has indicated he will sign disaster legislation when it reaches his desk.  It is hoped that the Senate bill can be considered and passed later this month.

It appears that this legislation for 2018 losses would provide relief through the Wildfires and Hurricanes Indemnity Program (WHIP) in a similar manner as for 2017 crop losses.  In general, the WHIP payments formula is:

The WHIP Harvest Value is based on the actual yield.  Insurance Indemnities would be the amount(s) received on the crop.  Efforts are on-going to have the premium paid deducted from this amount. 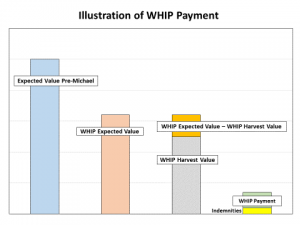 Because many producers in Georgia were anticipating a record crop, especially for non-irrigated production, it is realized that because WHIP is based on the farms APH, that any payment received cannot fully compensate for the actual loss.  Any amount of payment is helpful, however.

The following website illustrates an example of how WHIP worked for 2017 crop losses.  The WHIP factors will have to be updated/revised based on how similar legislation would compensate for 2018 losses.  Nevertheless, the illustrated example is useful in understanding the concept.

Currently, the projected seed cotton PLC Payment Rate is 2.9 cents per pound.  This is based on the most recent projections of the 2018 market year average (MYA) price for upland cotton and cottonseed.  The SC MYA Price is a weighted average price (based on production upland cotton and all cottonseed) as shown in the table below.  Currently, the SC MYA Price is projected to be 33.8 cents per pound.  This is subject to change—the marketing year for 2018 cotton does not end until July 31, 2019. 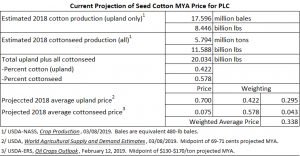 How PLC and ARC compare is going to vary and will be specific to the farm because the amount of any PLC payment, and thus how ARC and PLC will compare, will be determined in-part by your own PLC payment yield for your farm.  FSA guidelines for ARC/PLC election and enrollment for the 2019 and 2020 crops have not yet been announced.

Most producers have already made their seed cotton generic base allocation decision and election and enrollment of either ARC or PLC for the 2018 crop.  These decisions had to be made or the producer had to already be on FSA’s list (register) waiting to be serviced by December 7, 2018.

The late timing was such that ARC/PLC election and enrollment for 2018 didn’t have to be made until after the start of the 2018 crop marketing year and near the end of the 2018 growing season.  This turned out to be a good thing because Hurricane Michael resulted in large yield loss in some counties and, as a result, some seed cotton bases switched to ARC rather than PLC—ARC being more likely to have a higher payout than PLC for 2018 in some situations.

For the 2018 crop, a farm could have STAX insurance coverage and also have seed cotton base enrolled in ARC or PLC on the same farm.  We suspect this is because the crop insurance sales closing and premium payment deadlines for 2018 spring planted crops occurred months earlier and prior to ARC/PLC election and enrollment.  The sales closing deadline in Georgia, for example, is February 28th.

Effective with the 2019 crop, if a farm has seed cotton base and if that seed cotton base is enrolled in ARC/PLC, all cotton acres planted on that farm are not eligible for STAX.  This has been a source of confusion and misinformation.  The following website is an excellent source of information provided by the USDA Risk Management Agency (RMA) and answers many questions related to ARC/PLC and STAX:

In summary, if the seed cotton base on a farm is enrolled in ARC/PLC, all cotton acres planted on that farm are ineligible for STAX.  In Georgia, the crop insurance sales closing deadline for spring planted crops like cotton is February 28th.  This is likely going to be before the ARC/PLC enrollment deadline.  If a producer thinks he/she may want to have STAX coverage for the farm, the producer can purchase STAX first (by the sales closing deadline) then still have the option to enroll in ARC/PLC later, prior to the premium due date, and STAX coverage will be cancelled.  (Note: It is expected that STAX coverage can be cancelled but guidelines concerning this are not yet been released by RMA.)  The sales closing date for 2019 spring planted crops has already passed.

This entry was posted in Economics, Marketing, Policy and tagged Yangxuan Liu. Bookmark the permalink.