Silverleaf whitefly (SLWF) infestations are being observed in cotton in parts of Georgia.  Historically SLWF is a localized pest, requiring management in a relatively small geographic area.  High populations of SLWF were observed during the fall of 2016 and the mild winter resulted in higher than normal populations surviving the winter.  Vegetable producers have been treating SLWF in spring crops which is not normal.  We began seeing adult SLWF in cotton during June; we have received field reports of some fields exceeding thresholds and being treated for SLWF this week.  This is troubling as we normally consider it a “red flag” when we first observe adults in cotton during the month of July.  Bottom line is SLWF are being observed at least a month earlier than previous years and early detection and management in cotton must be a priority.  It is likely that timely intervention with SLWF insecticides will be needed in areas which have experienced SLWF in previous years (all fields are at risk, not just late planted as in most years) and perhaps areas which have rarely observed SLWF will be infested in 2017.

SLWF adults resemble tiny white moths.  Eggs are laid on the underside of leaves near the terminal.  The first instar nymph is called a “crawler”.  This is the only mobile stage of the immature SLWF.  The crawler moves a short distance in search of a suitable place to feed on the underside of the leaf.  The remainder of the immature stages are spent in the same location of the leaf.  Immature SLWF are oval and flattened in appearance and yellowish to translucent in color.   On cotton during the summer, SLWF complete a generation in about 2 weeks. 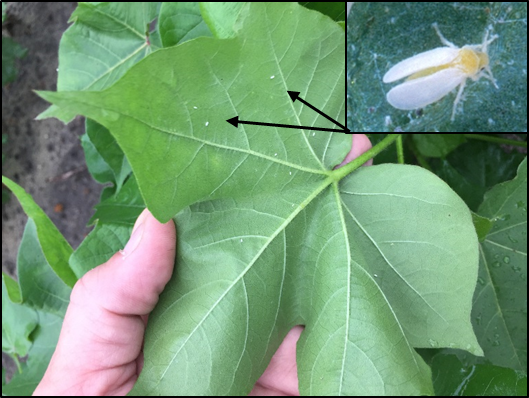 The presence of adult SLWF should influence decisions for other pests.  Conservation of beneficial insects should be a priority. 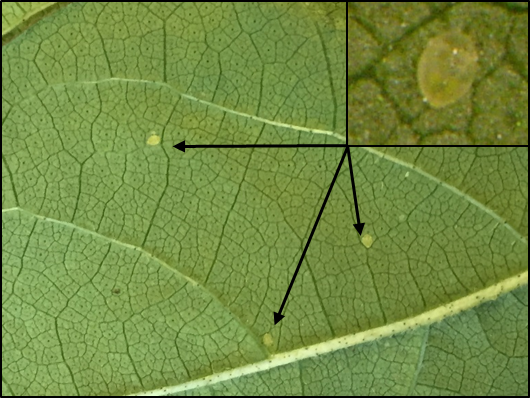 Immature SLWF on the underside of the 5th leaf below the terminal.  SLWF Threshold: Treat when 50 percent of sampled leaves (sample 5th expanded leaf below the terminal) are infested with multiple immatures (≥5 per leaf).  Insect Growth Regulators (Knack and Courier) are the backbone of SLWF management programs in cotton.  Effects on SLWF populations are generally slow due to the life stages targeted by IGRs, however these products have long residual activity and perform very well when applied on a timely basis.

Your county agent has one page publications summarizing:

A couple of additional points to consider are below:

Early detection of SLWF is critical for successful management.  The presence of SLWF adults in a field or on a farm should influence management decisions for other pests.  Use good IPM and conserve beneficial insects.  Only use insecticides for other pests when thresholds are exceeded and avoid insecticides such as organophosphates which are prone to flare SLWF when present.  Insecticides used for stink bug control are broad spectrum and will disrupt beneficial insects.

Timely insecticide applications targeting SLWF is a MUST.   The goal of SLWF management is to initiate control measures just prior to the period of most rapid SLWF population development. It is critically important that initial insecticide applications are well timed.  If you are late with the initial application control will be very difficult and expensive in the long run.  It is nearly impossible to regain control once the population reaches outbreak proportions!

This entry was posted in Insect Management. Bookmark the permalink.