County agents, scouts, and consultants are reporting the naturally occurring fungus which causes aphid populations to crash on a more frequent basis.  Each year aphid populations build and we anxiously await for the fungal epizootic or crash.  We have very effective insecticides for controlling aphids; however, UGA research cannot demonstrate a consistent yield response when treating aphids in cotton.  With that said there are likely fields which may need treatment for aphids in Georgia each year, but that would be a small percentage of the acreage.  In the few trials where we have observed yield responses, failure to control aphids resulted in stunted plants compared with protected plots.  It is a judgment call when and if to treat aphids, but I would consider the condition of the plant.  If growth is being impacted across the field (like we see in the original aphid hot spots now) treatment may be warranted.  Another indication would be yellowing of terminals.  Before making an insecticide application, be sure to look for the naturally occurring fungus which will cause aphid populations to crash.  The presence of gray fuzzy aphid cadavers is indicative of this fungus.  Once the fungus is commonly observed in a field we would anticipate the aphids to crash in a few days.

Good news!  In recent days we have received several reports of the aphid fungus.  Most reports have been from south of Tifton but some reports have come from other areas of the state.  Typically the fungus is first observed in southwest Georgia and moves north and east.  So be on the lookout for gray fuzzy aphid cadavers. 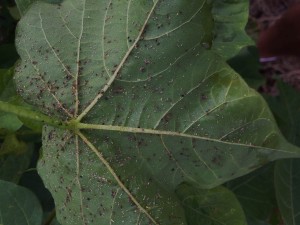 Notice the gray fuzzy aphid cadavers which is indicative of the naturally occurring fungus (photo by Steve Bullard).  Once commonly observed in the field aphids will crash in a few days.

This entry was posted in Uncategorized. Bookmark the permalink.