Cotton prices (Dec14 futures) bumped 65 cents this week.  After recently falling to the 61-cent level, prices have made a modest but still welcomed recovery.  The resistance or “ceiling” at the 67 to 68 cent area is likely pretty firm and will be difficult to negotiate in the near term without major changes in the supply/demand picture.  Likewise, any “floor” appears fragile and we can only hope the 61-cent area holds.

Dec14 is up slightly (at 64 and change) so far today.  Prices closed at just over 65 cents on Tuesday but then fell 2 consecutive days on Wednesday and yesterday.  It looks like we’ll be up about 2 cents for the week.  Reports seem to suggest that the improvement is at least somewhat due to tight old-crop supplies, weather delays in harvest in some areas, and fiber quality concerns.  But underlying these positive factors, are still some negatives—a disappointing export report this week and continued uncertainty about China cotton policies and potential demand for imports or lack thereof. 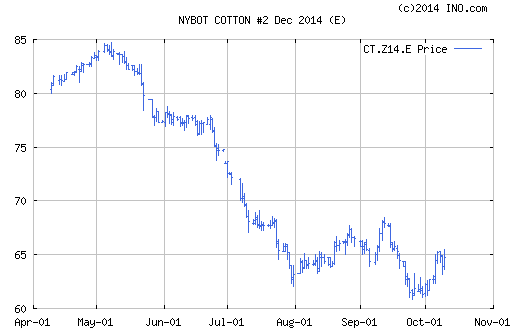 USDA released its October production and supply/demand numbers earlier today.  The US crop was lowered to 16.26 million bales—down 280K bales from the September estimate.  The US average yield was lowered from 803 to 790 lbs/acre.  There were no other changes in the US numbers.

The World numbers were a mixed bag.  Beginning stocks (carry-in from the 2013 crop year) were raised 1 million bales and 2014 production was also raised over 1 million bales.  But, Use was raised just over 1 ½ million bales.  So, on balance, this resulted in an increase in projected 2014-15 ending stocks.

An LDP is available when the Adjusted World Price (AWP) is less than the Loan Rate.  The LDP available for the coming week starting today is 2.29 cents/lb.  Upland cotton is eligible for an LDP provided the producer still has “beneficial interest” in the cotton.  This includes cotton already contracted but the terms of the contract will determine when beneficial interest is lost.  Have the contract reviewed by FSA.  The LDP is received in lieu of placing cotton in the Loan.  Any bales receiving an LDP are not eligible for Loan.

You can apply for the LDP even if the cotton is still in modules.  Take the producer portion of the module tag to the FSA office.  Otherwise, after the cotton is ginned, take the gin bale listing to FSA.  You’ll also be required to sign some forms and all this done by the close of business on Thursday to lock in the LDP for that week.  The LDP will increase if the A-Index declines; the LDP will decrease, otherwise.  If cotton is instead placed in Loan and the AWP is less than the Loan Rate when the Loan is redeemed, a Marketing Loan Gain (MLG) is realized based on this same math.