The last 2 weeks have not been pretty.  Prices have tumbled to levels not seen in 5 years.  Since recovering to 68 cents on September 11 and 12, prices (Dec14 futures) have lost over 6 ½ cents (10%) through yesterday—closing at 61.4 cents.  Prices are up just a bit so far today.

The 67 to 68 cent area, as expected, proved too tough to crack.  Prices turned down when that level was reached.  Now, events of this past week or so have pushed prices further down and below what was previously considered support at 63 to 64 cents. 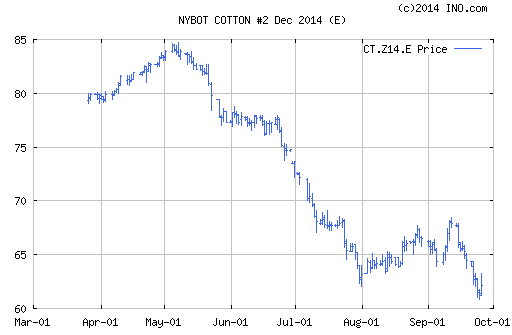 We all agree this is not a good time to be trying to sell cotton.  Considering the fact that cotton was once at 80 cents or better, nothing will appear relatively attractive at this point; but growers nevertheless need to carefully consider their options.  This includes placing cotton in Loan, selling and purchasing a Call Option, or taking any Loan Deficiency Payment (LDP) and selling the cotton or deferred pricing for later.

Space here does not allow us to get into all the definitions and mechanics but, when prices are as low or lower than they are now, it helps to know and understand the relationships between our New York futures, your local cash price, the A-Index, and the Adjusted World Price (AWP).  We haven’t had to deal with this in a while.

The A-Index (so-called Far East price) presently runs about 8 cents above cotton futures.  The AWP is currently the A-Index minus 19.7 cents for transportation and quality adjustments.  If the AWP is below the Loan Rate of 52 cents, an LDP equal to the difference is available.  In the example shown, the LDP is 1.7 cents and assuming a basis of zero, the LDP plus the cash or spot market sale would equal 63.7 cents.  An LDP is received in lieu of placing cotton in the Loan.  Growers can apply for and take the LDP and sell the cotton or take the LDP and hold the cotton—but then would be subject to storage charges.  For the purpose of determining any LDP, the AWP is calculated only weekly and is good for the following week.  Your “cash + LDP” position increases if futures and cash price increases during the week while the AWP is fixed.  The above is an example only.  The current LDP in effect is about 1 cent.

The big news events over the past week or more have been China.  Details have begun to emerge about China’s price support policy and imports.  Details are still somewhat sketchy so I do not want to venture too far into specifics.  I will relay what has been read from other sources.

The impact of these policies is unknown and we do not yet know full details.  Both have been, at least initially, interpreted as negative for global and US cotton prices.

Reading this news and discussing it with a few industry colleagues seems to suggest:

Neither of these policies directly addresses the still-remaining elephant in the room—China’s looming 60+ million bale stockpile.  Potentially, these 2 policies are an attempt to make China mills more reliant on their own cotton production.  Potentially, this could reduce the demand for and need for US exports; thus, the reason for the recent market decline. 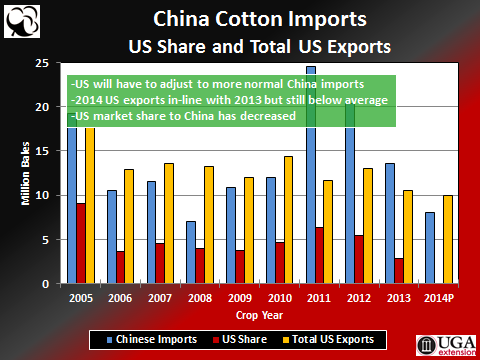 But the quality of the Chinese stocks is still in question.  Recently, sale from government-owned reserves were only 20% of what was offered.  Also, it would seem that if Chinese stocks are moved into the supply chain (too much or too quickly), would this not have the impact of pushing global prices lower and thus increase the target price subsidy and the cost of that program?  But again, not enough is known about how that program will work and the pricing mechanisms involved.