In 2009, one variety—DP555BR, dominated Georgia cotton acreage. DP555BR accounted for over 82% of Georgia cotton acreage.  This was the last year of its full availability.  The EPA registration for single-gene Bt technology expired with the 2009 crop.  In 2010, single-gene Bt technology was available only in limited quantities and then fully unavailable beginning in 2011.

Since the loss of DP555BR, no single variety has been that dominate in Georgia acreage.  Acreage has shifted to two-gene (B2 and W) varieties, specifically newer Delta-Pine (DP) varieties and Phytogen (PHY) varieties.

Last season, PHY499WRF accounted for almost one-third of Georgia acreage.  This year, 499 accounted for about 20%.  DP1252B2RF increased from 13% of acreage last year to over 20% of acreage this year and was the most-planted variety in the state—slightly ahead of DP1050B2RF.  DP1252, 1050, and PHY499 had about equal proportions of Georgia’s acreage this season and together account for almost 60% of acres.

Small amounts of non-transgenic varieties were planted in 2012 and again in 2013.  Approximetly 1,100 acres (.08%) of Georgia acreage this season was planted to Americot AM UA48. 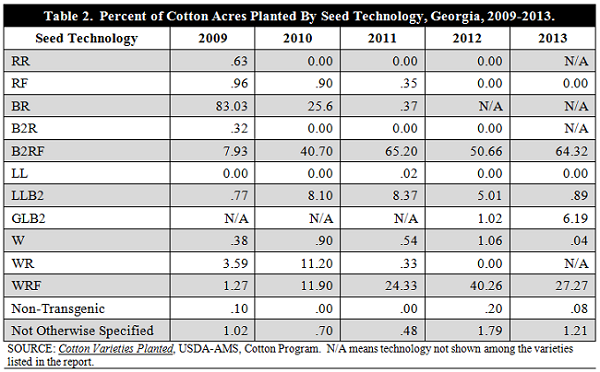