November Report More of the Same

Spot cash prices for 41-4/34 are 225 points under December futures and only 53 points under March.  March futures are currently at a discount to (less than) December.  This typically reflects uncertainty or anticipated weakness in demand but, this year, may also reflect near-term quality concerns with the crop (need for tenderable grades). 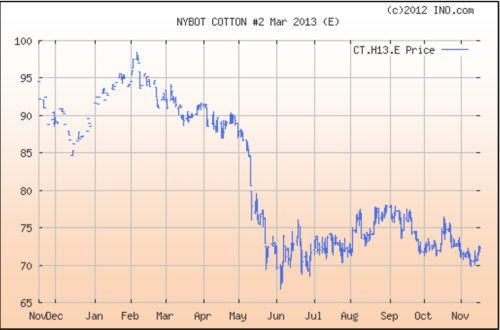 The market continues to hold above the 70-cent level.  March is currently just over 72½.  Prices have improved a bit—up 2 cents for the week.

USDA’s November production and supply-demand numbers show continuation of the trend that has hammered the market for the better part 6 months—stagnant and eroding demand and increased World stocks.  At the end of the 2012 crop marketing year on July 31, 2013 it’s now projected we’ll carry 80.3 million bales of old-crop cotton into the 2013 production and marketing year.  That’s a record level by a long shot and to put that into perspective—that’s 9 months of use before the first boll of 2013 cotton is even picked.

This month’s report also dropped World demand slightly from 106.9 to 106.3 million bales.  On the demand side, it’s been death by hundreds of little paper cuts.  For the 2011-12 marketing year, World use was 103.17 million bales.  For the 2012-13 crop year, use/demand was once estimated at almost 110 million bales—which would have been quite and improvement.  But since then, the monthly estimates have trended down.

New crop futures (Dec13) are currently between 76 and 77 cents.  At this price, acreage will be down significantly—shifting to soybeans and corn.  As we look ahead, there are many factors that ultimately will play into price direction for the 2013 crop.

A key factor will be China’s policy on managing its stocks/reserves.  China holds almost ½ of all World stocks.  China’s stocks policies will impact its demand for imports and thus US exports.   The 2013 price outlook will not improve significantly just because acreage and production are reduced.  Better prices, in 2013-14 or beyond, depend on improved demand and working down the now burdensome level of stocks.

This entry was posted in Economics, Marketing, Policy. Bookmark the permalink.